The Kruskal Wallis one-way analysis of variance is a statistical hypothesis test to compare the medians among more than two groups.

The Kruskal–Wallis test works very similarly to the Mann–Whitney Test.
Step 1: Group the k samples from k populations (sample i is from population i) into one single data set and then sort the data in ascending order ranked from 1 to N, where N is the total number of observations across k groups.
Step 2: Add up the ranks for all the observations from sample i and call it ri, where i can be any integer between 1 and k.
Step 3: Calculate the test statistic 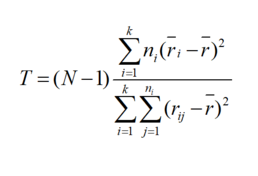 Step 4: Make a decision of whether to reject the null hypothesis.

The test statistic follows chi-square distribution when the null hypothesis is true. If T is greater than

(the critical chi-square statistic), we reject the null and claim there is at least one median statistically different from other medians. If T is smaller than

, we fail to reject the null and claim the medians of k groups are equal.

Use SigmaXL to Run a Kruskal Wallis One-Way ANOVA

Steps to run a Kruskal–Wallis One-Way ANOVA in SigmaXL

Model summary: The p-value of the test is lower than alpha level (0.05), and we reject the null hypothesis and conclude that at least the overall satisfaction median of one customer type is statistically different from the others. The result of the test is boxed in: The p-value is lower than the alpha value of 0.05; therefore, we must reject the null hypothesis and claim that at least one of the customer types has a different level of satisfaction than the others.